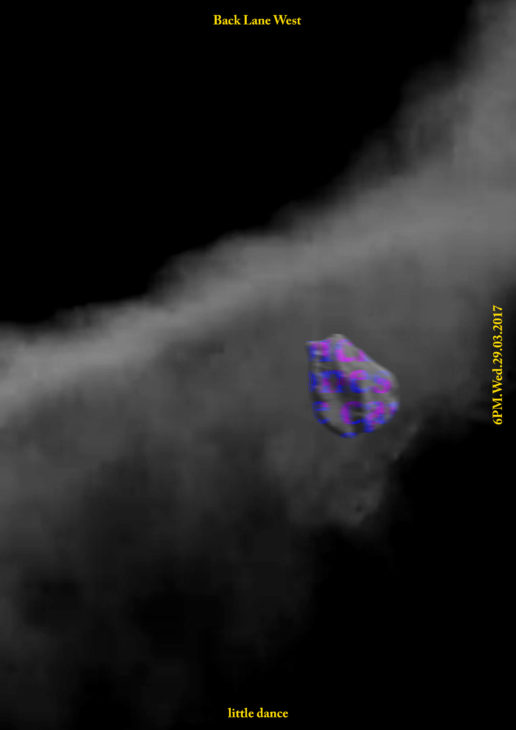 Hey, Stranger,
Do you want a dating with me? Little
dance I’ll take you to some nice place.
There’s yellow flowers smells like coconut,
white mud, moss on the everywhere.
Back Lane West I’ll pick up beautiful
stones for you. Or we can swimming naked in
the milky lake. maybe we have a great time
together.
call me. 6pm.Wed.29.03.2017
Erika Cox

We would like to invite you to join the artists on Wednesday 29th March, 2017 from 6pm to see the outcomes of their research and celebrate the 2nd moon with cocktails and nibbles.

During March, Back Lane West is pleased to be hosting three Korean artists, Nayoung Kim, Yesul Kim and Junyoung Park. Over the month they have been researching two areas of interest, the very particular landscape of the China clay workings around St Austell and the discovery last year of a ‘second moon’, a small asteroid in an orbit around the sun that keeps it as a constant companion of Earth.

In 2016 a small asteroid ‘2016 HO3’ was discovered in an orbit around the sun that keeps it as a constant companion of Earth. “In effect this small asteroid is caught in a little dance with earth” said Paul Chodas, NASA-JPL. This ‘second moon’ is small and fast, having an irregular rhythm and orbit, and is invisible from the earth. In its relationship with the earth, ‘the little dance’ of the asteroid is quite similar to us facing the giganticness of a landscape or our globalised society. We (each or together) are considering with what kind of attitude we will approach this ‘little dance’.

The title of the project, ‘Little Dance’ is a metaphor for our activity exploring the landscape remaining from an era of material production, and reconsidering the value of productivity related to materiality through our sporadic activities which are small, weak and invisible. In this context, we try to redefine the value of productivity, appropriated for the contemporary age, and to find out possible forms through art works, getting rid of the boundaries between production, artwork, and archiving. We perceive the ‘Little Dance’ as a way of making relationships between space and actors, each of whom has its own rhythm, movement and thought, or between actors and actors. Exploring behaviours without order in a wide landscape across the boundaries of production, artwork, and archiving. On top of that, our ideas will surface and the landscape will reveal small changes. Everything is real, but due to the characteristic of the place, nothing can be seen. As a tool that can overcome the limit of this visibility, we bring in a web page as a space of the same status with the landscape. Artists expand the web page to the space of thought, work production, and archiving, and continue to work while coming and going two sites.

Nayoung Kim is fascinated by raw material, each individual’s energy, the elegance of chance. Her works are gentle, suspended and refined moments; architectural pieces with subtle clues of human activities, direction and languages. Paying close attention to the ecosystem in which she moves in, she precisely creates the situations, which question her ways of doing, and educates an open-work community.

Since 2013, Junyoung Park has been working on the boundary of personal and social myths through literature and musical medium by giving characters that touch specific issues to a hypothetical person named ‘Gay Gonjo’. However, Gayo Gonjo got his own history out of the artist, and began to expand his relationship. From the point of that, Park rethink the relationship between artist, names, and characters. Currently He working on names that do not have character traits such as Bak ail, gb, erika cox.

Yesul Kim is working as artist and graphic designer running the graphic design studio Giggal. She is interested in examining  the relationships between people, society and environment and exploring these relationships through audience participation. Recently she worked on Artist survival project through which she questioned, in an ironic way how artists should position themselves in an art system and who are those best qualified to be an artist.